The best and worst banks to work for in spring 2019, by JPMorgan

Now that banks are embarking upon wholesale restructuring plans, you may be feeling a little restless. - Particularly as the first quarter has not gone well.

Opportunely, JPMorgan's banking analysts, led by Kian Abouhossein, have just released their global banking tracker in which they predict the banks that are likely to reveal the best and worst performances for the first quarter when their results are disclosed in the coming weeks.

With feeble revenues seeming to be unavoidable, JPMorgan's analysts are preoccupied with cost-cutting . If banks can't cut costs to match falling revenues, profits will suffer. Partly on this basis they rank their preferred banks in 2019 as: Goldman Sachs, UBS, Morgan Stanley, Barclays, Credit Suisse, BNP Paribas, SocGen and Deutsche Bank. - With Deutsche Bank last of all.

This is what the analysts say about some of their choices. The charts below offer more colour on expected performance by revenue.

JPM analysts say David Solomon's Goldman Sachs is "ticking all the right boxes on revenue growth initiatives." However, they also note that a strategy update is due later this year.

The only blot on Thiam's copybook is Credit Suisse's investment bank. The analysts note that this absorbs 36% of group capital whilst only generating 22% of group profit before tax. They note that the equities business is loss-making and needs to be "right-sized" for wealth management, while the credit business is far too capital-hungry for its size, even at peak earnings, and by implication needs to be slimmed-down too.

The JPMorgan analysts' main gripe with Deutsche Bank seems to be its optimism. They estimate that for Deutsche Bank to deliver its tangible return on equity target of 4%, it needs to achieve 4.5% revenue growth. However, it's not at all clear that this will happen - particularly in the investment bank, where the charts below suggest big year-on-year percentage revenue reductions everywhere but M&A and debt capital markets in the first quarter. 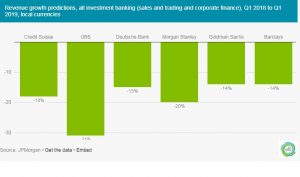 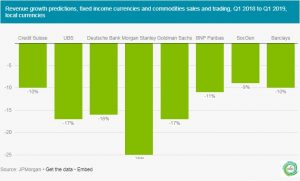 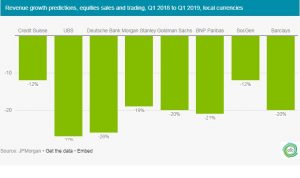 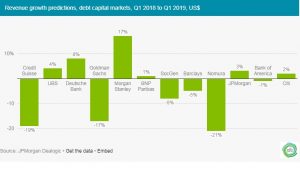 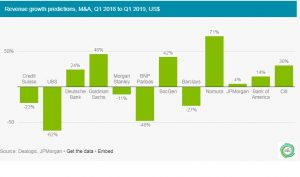 View all posts by: Keith Tong